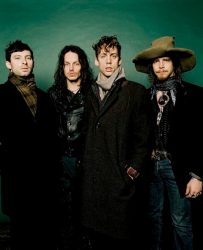 Music Week are reporting that pop overtook rock in terms of album sales market share in 2011, the first time it has done so since 1999.

As expected, this shift was helped by Adele's '19' and '21' albums, while only two tra­di­tional 'rock' albums made it into the end of year Top 20.

The whole thing is a bit confusing really because the artists assigned to each genre are a bit random, but there you go.

A Newsdump for 16 January 2012: From Madonna's win at a Golden show to Ne-Yo not chewing tobacco