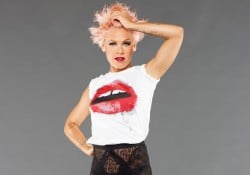 P'!'nk's new album 'The Truth About Love' has entered at Number One on the Billboard 200 album chart, selling a fairly decent 280,000 copies to claim the top spot.

Speaking of Jeppo, 'Call Me Maybe' has sold 5.7 Million copies in America this year, which is quite the 'feat' ins't it readers?

Rihanna is back — but will anyone care?

Christina Aguilera thinks she may be a misunderstood artist