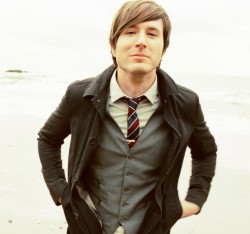 Owl City feels a special con­nec­tion with Carly Rae Jepsen because he too has had a massive single that everyone assumed would be a one-hit wonder.

"I feel like Carly's going through a few things now that I had a taste of a few years ago with my single 'Fireflies'," Owl told BBC Newsbeat about his 'Good Time' duet partner.

"I've never known anybody that that's happened to before that I've been able to talk about that with."

And what was his advice to young Carly Rae?

"The most important thing in the world is sincerity and I think she's got that. I just said, 'I'm with you on the same ride in a way.'"

After Owl's follow-up single limped into the US charts at Number 72, he decided to just not give a shit about chart positions: "I feel like I've figured it out. A big part of it was teaching myself not to care too much — not to overthink what's coming next."

"The blessing and the curse of a big hit like 'Fireflies' is people saying, 'Can he do it again?' or 'What's coming next?' 'Flash in the pan' — all that kind of thing. To just let that stay and not worry about that."