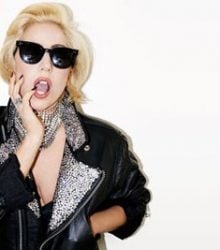 A Christian youth group in the Philippines  have taken a leaf out of Korea's bible and protested Lady Gaga's upcoming concerts on May 21 and 22.

The carefree kids from Biblemode Youth Philippines held a demon­stra­tion today chanting "Stop the Lady Gaga concerts", and cited 'Judas' as a par­tic­u­lar bone of contention.

Protest leader Benny Abante (amazing popstar name should he change career) told the New Straits Times that he intends to file a legal objection should Gaga sing 'Judas'. He really hopes she does 'Boys Boys Boys' though, that's his favesies.

"She has songs that suggest that she wants to have sex with Judas and performs it with a dance," protester James Imbong told the Philippine Star newspaper. "Of course it would be accom­pan­ied by a costume that has por­no­graphic elements."

Pasay City's Mayor of LOLs said he "reminded" promoters that the show "shall not exhibit any nudity or lewd conduct which may be offensive to morals and good customs".

Emeli Sandé's joined the lineup for the iTunes Festival