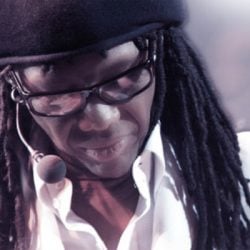 Adam Lambert col­lab­or­ator Nile Rodgers has 'revealed' that he's been working with David Guetta and Avicii. Of course he has.

Having a chat with the Official Charts Company, he was asked what he's been up to since Daft Punk and he had this to say:

"Last night I was working with David Guetta writing a song. It was unbe­liev­able, we went until 2 in the morning, and Arthur Baker and Taylor Dayne popped by — it felt like it was if we were back in the '80s."

"I’ve been working with a super talented writer and producer Avicii. This guy is such a genius writer. We’ve already written three or four songs together and can’t get enough of each other," he continued.