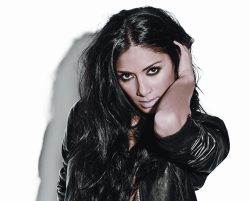 Nicole Scherzinger has spoken about the elim­in­a­tion of Rachel Crow on US X Factor last week.

Nicole sent the results to deadlock rather than cast a deciding vote, which resulted in 13-year old Rachel being voted off in hys­ter­ical cir­cum­stances. According to People, Nicole felt "like I dropped her. I could have been holding on and I dropped her".

However, the 'Baby Love' hitmaker was defiant about her decision.

"Did I think America probably would have chosen Rachel? The prob­ab­il­ity was that they would have sent Marcus home." Wiping her hands of the whole sorry affair she said, "ulti­mately America made the choice".

It hasn't really been great publicity for Nicole's 'Killer Love' album, which still hasn't had a US release.