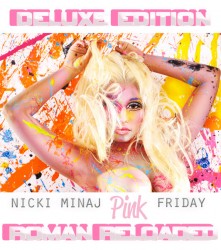 A sampler of the deluxe edition of Nicki Minaj's 'Pink Friday: Roman Reloaded' has appeared online and then (mostly) dis­ap­peared again.

The mammoth 22-track sampler featuring one-minute clips of each track surfaced last night but was quickly removed by the fun police. Luckily, at least one version of the snippet marathon seems to have survived here for now.

The album goes on sale on April 3 and there's a track­list­ing below so you can pick which song is your favourite.

We'd suggest a nice cup of tea after all that.

One Direction are Number One in America