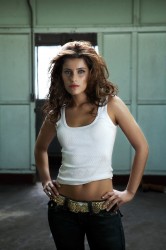 The 'Bajo Otra Luz' hitmaker revealed the title alongside another black and white video of her working hard in the studio (this one involves Rodney Jerkins moaning about how many times they've had to listen to one of the songs).

'Big Hoops (Bigger The Better)' will precede the album 'TSI' but no release details have been confirmed as yet.