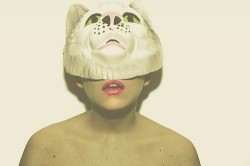 Marina & The Diamonds is back with a new song, 'Fear And Loathing', taken form a second album that seems to be called 'Electra Heart'.

Writing on her blog, Marina said: ""Electra Heart" epi­tom­ises and embodies the lies, illusions and death of American ideo­lo­gies involved in the cor­rup­tion of self."

She goes on to say that the moody, ethereal ballad is an album track and will be followed next Monday by another new song.

The song's video features Marina singing into a mirror before hacking away at her hair and gazing thought­fully at the skyline from a hotel balcony. We think this probably has some deep and sig­ni­fic­ant meaning but we've yet to work it all out to be honest.

Marina & The Diamonds — Fear And Loathing