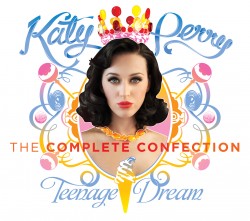 The re-release will include three brand new tracks, alongside a seven-minute Tommie Sunshine megamix featuring all five US Number Ones and 'The One That Got Away'.

Also included is the Kanye West version of 'ET', the Missy Elliot version of 'Last Friday Night (TGIF)' and the fucking boring acoustic version of 'The One That Got Away'.

"I’m moving forward and had a few things left to get off my chest," explains Katy, "so this is the complete special edition of my album for my fans."

'Teenage Dream: The Complete Confection' will be released on March 26 and the artwork is atrocious.

Here are the three best songs in Ireland's Eurovision shortlist