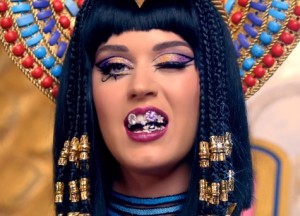 Katy Perry's covered the 1892 smash hit 'Daisy Bell (Bicycle Built for Two)' for an art project thing and now some of it is online, reports Billboard.

The cover is part of artist Mark Ryden's new project The Gay Nineties Old Tyme Music: Daisy Bell, which features a number of musicians — including Tyler, The Creator and Nick Cave — reworking the song.

Copies of the album are available to buy at Ryden's exhib­i­tion in LA or online for $99.99, with proceeds going to charity.

Ryden's most famous work in the 'pop sphere' is of course his slightly creepy cover of Michael Jackson's 'Dangerous' album.