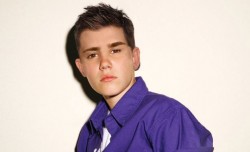 Justin Bieber has recruited Tinie Tempah for the UK version of his cover of the Bing Crosby festive classic, 'Little Drummer Boy'.

'Taking to Twitter' Bieber revealed that he was about to film one of those ridicu­lous ITV specials for his 'Under The Mistletoe' album and that Tinie Tempah was involved in said production.

Later, once the whole thing was over, Tinie tweeted "Just done something Incredible!", which we assume was perform with Justin and not a really massive shit.

She's going to fall off that bed and bonk her head during the night, mark our words

Katy Perry — The One That Got Away