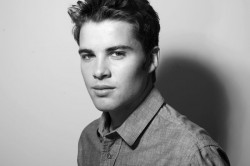 'Adeste Fideles (O Come All Ye Faithful)' hitmaker Joe McElderry isn't par­tic­u­larly bothered that Dappy cri­ti­cised him on his new single and has said as much in some quotes we are about to paste below so hold onto your hats.

Little Joe, who had pre­vi­ously made it known he'd love to work with not-so-little Dappy in the future, told BANG Showbiz (as quoted here): "I'm not really bothered if he wants to write about me in a song. I don't really find him inter­est­ing enough to write about in my songs but if that's what he wants to do, he can do that."

"I've met him loads of times and it's just one of those things," he continued. "I'm sure he's probably just doing it to sell more singles, but there you go."

We think you might be onto something there Joe.