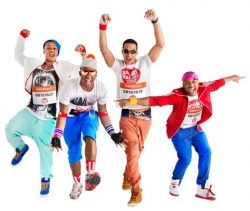 JLS have said they are "lucky" not to have been influ­enced by drug abuse like Amy Winehouse and their "idol" Whitney Houston.

In reference to the singers they said it's easier to stay on the straight and narrow as they're part of a group.

JB explained  that"it's different when you're a solo artist, it would be very hard and very difficult", adding: "If you're young as well — you generally spend time with people who are a lot older than you."

The Mayfair regulars say that despite their clubbing lifestyle they've never been offered so much as a sniff of poppers. Oritsé told Metro: "We don't get offered drugs…some artists might say different … we've never had any instances of people offering us this or that."

You're going to the wrong clubs, pal.

Katy Perry rewrote some lyrics to reference her recent divorce

Rihanna's 'Birthday Cake' producers have spoken about its release