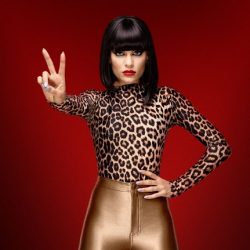 Vigilante therapist Jessie J has 'revealed' that she called the head of the BBC to ask him to move the filming dates for the next series of The Voice so that she could do it.

"My tour dates and the dates of The Voice clashed, so I said: 'I need to pri­or­it­ise my tour and my fans,'" she told Alan Carr (as quoted here).

"I was really gutted so I called the head of the BBC and said ‘Can we talk about this? I don’t feel right.’"

"I didn’t want to miss out, so I sat with them and we looked at the dates and we jigged things around and I was then able to do it," she continued.

Surely the easiest thing would have been just not to do it, par­tic­u­larly con­sid­er­ing what a big old pile of horseshit the first series was. But there you are.

She also had a chat about some things that need to change about the show — the sob stories.

"I am not a major fan of the whole back story and 'Let’s all feel sorry for everyone'," the former victim of a broken foot explained. "It is a bit like: 'Been there, done that, seen that.' Isn’t it about the voice?"