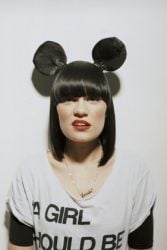 Opening with a short preamble about how "epic" her fans are for getting new single 'Domino' to Number One in the UK (it's currently the most down­loaded song on iTunes), she then launches into a live version of said single.

There are also a few 'cameos' in the video and a bit where everyone clicks their fingers around Jessie's face.

Justin Timberlake has revealed his plans for MySpace

Alexandra Burke has been talking about the elephant in the room