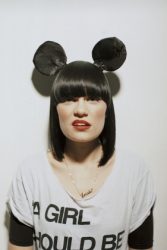 An injured Jessie J performed at Capital's Summertime Ball wearing a rather fetching support sock, after falling off the stage during rehearsals.

J was taken to hospital on Saturday after tearing tendons in her left foot and was initially advised not to perform. But you cannot stop the force of music and she performed anyway.

"I fell off the stage and mashed up my foot," she told the crowd. "I ruptured all tendons in it. I was told to stay at home. But I said, 'Are you crazy? I'm not letting down my fans.' I did ask for a crystal sock but this is all they had."

After her per­form­ance she took to Twitter, thanking fans for their support, claiming the show was the "Most amazing moment in my life" (unlikely but a nice thing to say) then used the spec­tac­u­lar phrase "Bruck up foot and all".

Beyoncé took time off to learn how to cook