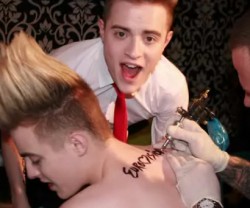 Jedward have had the Eurovision logo tattooed onto them­selves.

John had the logo tattooed along his right forearm, while Edward opted to get the logo inked across the back of his neck.

"It shows how Jedicated we are," they told the gathered press. Speaking to 4Music.com about the stunt, John said: "My tattoo really hurt but Edward and I did it for Eurovision as we so want to win the com­pet­i­tion for Ireland."

Supposedly respons­ible adult and manager Louis Walsh added: "Having tattoos is crazy but just shows how much passion they have to try and win the contest in May in Baku for Ireland."

You can watch the boys' trip to the tattoo parlour here — it may or may not all be an early April Fools prank.

Little Mix are bringing out a biography