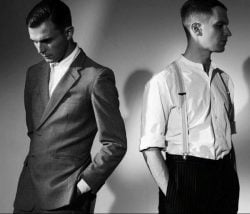 Hurts have announced details of two 'gigs' for February 2013.

The 'All I Want For Christmas Is New Year's Day' hitmakers will stand around moodily at Heaven in London on February 7, before going to Berlin on February 9 to play at the Postbahnhof.

These are their first 'gigs' since November 2011 so forgive them if they're a bit rusty. Apparently they still haven't finished their new album, but we imagine they'll play a few new songs.

Tickets for the London show — which is part of the NME Awards — go on pre-sale tomorrow and general sale on Friday. If you fancy a trip to Berlin you'll need to read this as there's some kind of ballot thing happening.

Beyoncé's put a trailer for her documentary on the internet

will.i.am's claimed Britney Spears is on 'Scream And Shout' because she loves music