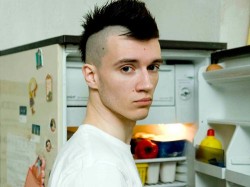 In an interview with Digital Spy, Frankmusik has spoken about his track 'No Champagne', a col­lab­or­a­tion with singer-song­writer, actress and short-film maker Natalia Kills.

Vincent Frank described the track, which will feature on his forth­com­ing studio album, as sounding "a bit like a Timbaland track from three years ago with some weird pro­duc­tion moments". Great.

Vince also said his track 'No ID', which features Collette Carr, is likely to be his next single.

He also expressed an interest in recording a duet with Royal Wedding singer Ellie Goulding.

His new single 'Do It in the AM', which features Far East Movement, is will be released on July 18.

Adele has lost her voice