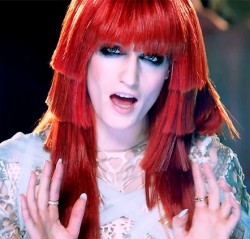 Florence 'Florence' Welch is quite a big fan of Calvin Harris.

"I'm such a huge fan of his," she confirmed  to celebrity site DigitalSpy regarding the 'Michael Jackson' producer. "What I enjoy about Calvin's songs is that he has that blend of euphoric and mel­an­cholic which as an artist he has managed to perfect."

Plus it helps that he can get you a lot of radio play.

"It's that mix of catchy and sad — that feeling of complete joy but something tugging at your insides. That's what makes a great pop song and I really think he's coined that," she continued, misusing the word 'coined'.

All this talk of dance music has clearly influ­enced her as she also 'revealed' she's started a dance side project called Side Project. "We made this weird house track that sounded quite churchy — to be confirmed! As yet it has never seen the light of day," she said.