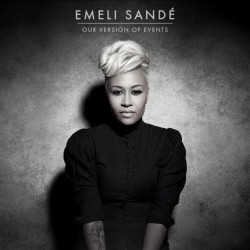 True Star Of The Olympics Emeli Sandé is re-releasing her album 'Our Version Of Events' on October 8.

The repackage will include her recent col­lab­or­a­tion with Naughty Boy for his single 'Wonder', that song she did on Labrinth's album, a version of 'Abide With Me', a new version of album track 'Breaking The Law' and one new song, 'Easier In Bed'.

There's also a new cover, which you can see here.