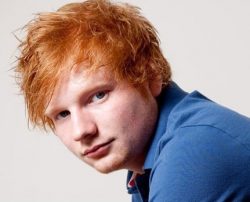 Pop rebel Ed Sheeran's next album — which is already finished, but not due until 2014 — will be a bit happier, so that's good to know.

"I've had a different inspir­a­tion on this record — obviously I haven't had the same exper­i­ences it will be different, but only from the sense it won't be tackling such dark matters," Sheeran told MTV.

"Maybe it will, maybe something really bad will happen within the next nine months and I'll write about that."

"It's a bit of a happier album, I think…Some of the songs are happy," he continued.

"I am moving to Nashville, setting up shop there," Sheeran confirmed. "Nashville is wicked it's like a proper music community, but it's also quint­es­sen­tially American. You bump into people there with cowboy hates that spit in jars and call you 'boy.' I just love that."