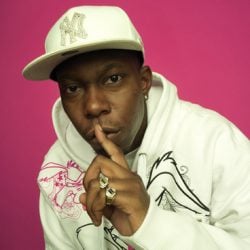 "I don’t know how I’ve got this tag as ‘the urban godfather’ because I just do my thing," he told the Daily Star Playlist. "It’s an honour if people see me as an inspir­a­tion but when I’m in the studio it’s all about what my next step is."

Like all of us Dizzee enjoys a bit of a dance but he'd prefer to do it without thinking about his own greatness.

"If 'Pass Out' by Tinie comes on in a club, I’m right there on the dance floor," he mused. "I’m not thinking: 'Hmm, has my music inspired him?'"

Dizzee was also quick to clear up this idea that he's just been sitting on his arse doing nothing for the past few years.

"I’ve been out of the game but as well as chilling I’ve been con­stantly working on the album. It’s only other people who think I’ve been away, as I’ve still been busy."

Dizzee's fifth album will be out at some point this year we imagine.

Cee Lo Green wants to get his cockatoo out on The Voice US, but some people think it's a bad idea