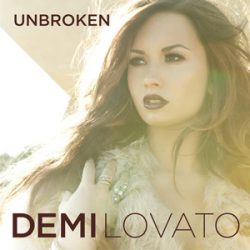 So what do we learn? Well, we can see that she's given employ­ment to Missy Elliott and Timbaland (probably amazing), Iyaz (hmm), Dev (okay…) and Jason Derulo (oh dear). Weirdly, the four col­lab­or­a­tions are all stuck at the top of the album, perhaps to get the party out of the way before what looks like a massive balladfest.

There's 'Fix A Heart', 'Give Your Heart A Break', 'My Love Is Like A Star' and the poten­tially amazing 'For The Love Of A Daughter'. There's also a remix of 'Skyscraper' tacked on the end.

In other news, Lovato also caused a minor twitter 'meltdown' among her drama-loving followers by tweeting: "Real friends don't encourage you to do drugs" and "Not afraid to write a tell-all book and share my side of every story. Had enough of all these rumors, hollywood brats and shady hanger-oners", then unfol­low­ing Miley Cyrus.

The album is out on the 20th September.

There have been lots of singles sold this year