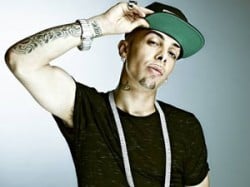 Well-endowed death-threatener Dappy has premiered his new single on BBC 1Xtra. It's called 'Good Intentions' and you can listen to it here.

After giving the ballad its first play, DJ Twin B commented "there's def­in­itely a Dappy sound, init?", which is certainly a dip­lo­matic way of putting it.

The 'I'm Coming (Tarzan Part 2)' hitmaker 'took to Twitter' to explain his emotional con­nec­tion to the confessional:

'Good Intentions' will be released on iTunes on September 23, while Dappy's debut album follows on October 1. It is called, wait for it, 'Bad Intentions'.

Ellie Goulding has released the artwork for her new single

The Good Natured — 'She Drives Me Crazy'