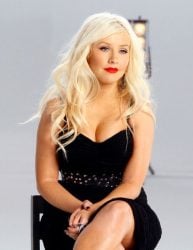 'Loving Me 4 Me' chanteuse Christina Aguilera is set to have her career recog­nised at the People's Choice Awards 2013.

That Grape Juice reports that 'X'tina will be receiving the People's Voice Award, which honours her "out­stand­ing achieve­ments in the music industry, and cel­eb­rates her ability to reach millions of fans both at home and abroad, across pop, soul, and R&B genres".

'Tens of thousands' of fans is probably a better estimate but you get the idea.

“I am thrilled to announce that Christina Aguilera is joining Jason Aldean as a performer at the People’s Choice Awards," said executive producer Sean Burnett in a boring statement. "Christina is one of my dearest friends and lights up literally every stage she steps onto."

If you'd like to witness this monu­mental moment in music history, the show will air January 13.