Charli XCX reckons this debut album of hers is like her first born child.

Chatting to Idolator about the album, 'True Romance', and how the nice people at her label let her get on with making the album she wanted to make, she said the following:

"They [her 'team'] have allowed me to take my time and be in control of my project. They’ve let me make the album I want to make. And now I know that, if it all fucks up — which I don’t think it will because I’m really proud of the record — it’s on my back."

Mind you, if the album is her baby, then what were the mixtapes?

"There was no real thought process behind the mixtapes," she 'explained'. "I just wanted to put something out. They were much more, like, just vibes."

"But they’re vibes, whereas 'Nuclear Seasons' and 'Stay Away' are true songs. 'True Romance' is kind of a blend of both. It’s a pop album, but it’s done on my own terms and it’s based out of this weirder world."

It's also very good and out on April 15.

Beyoncé's headlining a festival curated by her husband, Mr Knowles 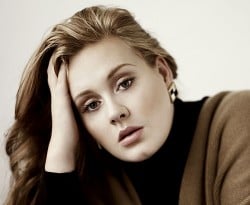 Adele has quite a bit of money