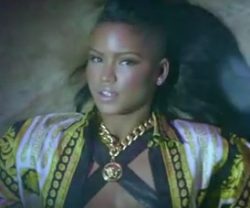 Cassie’s been talking about her new album, new single and people she’d still love to work with.

Speaking to MTV she let slip that her second single would be the Jean Baptise-produced ‘Money On Love’ which she describes as “a little bit funkier” than ‘King Of Hearts’.

Her hugely delayed second album appar­ently has a “little bit of stuff for everybody”, including a ska-influ­enced track called ‘Mr Valentine’ as well as some R&B ballads.

But she's not stopping at this album. SBTRKT, who she says she’d “love to col­lab­or­ate with”, makes it on to her wishlist along with College, Lovefoxxx and composer Cliff Martinez.

“I don't know who the artists are on it," she adds, "but I've been listening to the Drive soundtrack. It's amazing! I loved the movie!”

Perseus does one thing — "tropical euphoria" if you please — rather well.