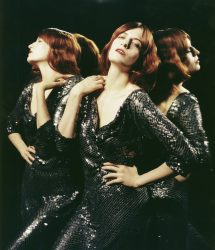 Florence + The Machine's new single 'Spectrum' will come with a donk­tastic remix by Calvin Harris. According to a press release, it will be a "brand new version" and "a huge rework".

We think this will be quite good. After all, this is the man that made Jamiroquai listen­able.

In other exciting news, the video for 'Spectrum' will be directed by David LaChapelle, who recently filmed the video with Florence at his Los Angeles studio. It's the first music video he's done since Amy Winehouse's 'Tears Dry On Their Own'. He commented of 'Spectrum': "I hope that I can do justice to this moving modern classic."

The video for 'Spectrum' will 'premiere' on May 30. The ‘Spectrum’ /’Breaking Down’ EP will be released on July 8, and con­sid­er­ing the amount of cash they're obviously throwing at this it will probably appear on limited edition lumin­es­cent vinyl hand­craf­ted by monks.

There's also going to be an AlunaGeorge remix, which could go either way.

Leona's going to be a guest judge on the X Factor