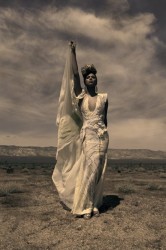 Four-day-old Blue Ivy Carter has become the youngest person ever to feature on the US Billboard chart.

A recording of Blue Ivy's wailing earned her a credit as featured artist on 'Glory', Jay‑Z's  ded­ic­a­tion to her, which landed at Number 74 on the Top R&B/Hip Hop Songs chart.

The track became a viral 'sensation' when Jay‑Z debuted it on Monday, shortly after he and Beyoncé confirmed the birth of their daughter.