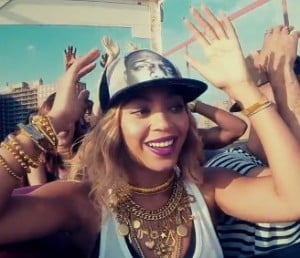 Apparently it's highly likely Beyoncé will be having a singsong at the Brits later this month.

According to a well-placed source with access to both Beyoncé's record label and The Sun newspaper, the whole thing is "on".

"Beyonce is on," he/she confirmed (as quoted here). "The only reason this has not yet been announced offi­cially is because the Brits guys are nervous that it could all go wrong again."

(As you well know, Beyoncé was supposed to perform last year but scrapped her whole album etc etc and so on BUT THAT WAS ALL PART OF HER AMAZING REVOLUTIONARY PLAN TO CHANGE THE WAY WE CONSUME MUSIC ALRIGHT?)

Ellie Goulding will be releasing a new version of 'Flashlight'

Bits About Pop: From Enrique and Kylie’s respective labels having an argument to One Direction sharing some more timeless video content