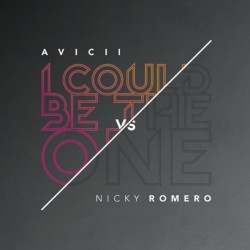 Leona Lewis fan Avicii and his friend and yours and ours Nicky Romero have this week's UK Number One single with 'I Could Be The One'.

The new entry sold 8,000 more copies than last week's 'chart-topper' from Macklemore, which drops to Number 2.

One place below that is a new entry from Baauer with the 'hilarious' meme-abetted tune 'Harlem Shake', which is followed by further new entries from hellraisers Gabrielle Aplin at Number 6 with 'Please Don't Say You Love Me' and Bruno Mars at Number 7 with 'When I Was Your Man'.

Other new entries of note come from P'!'nk at Number 24 with 'Just Give Me A Reason' and Justin Timberlake at Number 28 with 'Mirrors', which is one of those free-when-you-pre-order tracks. There's also a new entry at Number 37 for Zedd and Foxes with 'Clarity', so well done them.

On the album chart, the Les Mis soundtrack holds off Foals' 'Holy Fire' by less than 1,000 copies, which is sort of the only 'inter­est­ing' thing to happen in the entire chart.

Oh and Tegan & Sara's 'Heartthrob' entered at Number 38, so there are lot of you who need to hang your heads in shame.

Adam Lambert's covered the song 'Stay' by the singer Rihanna