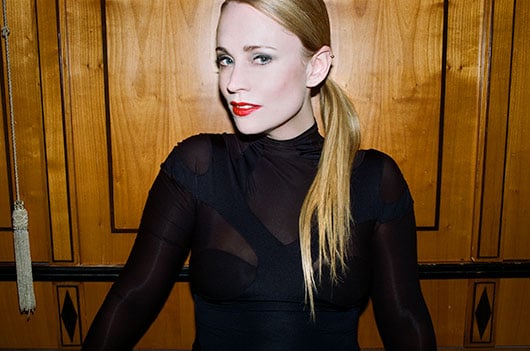 Ring the bells — Annie is back on August 5 with a new, five-track EP.

It's called 'The A&R EP'. The A stands for Annie and the R stands for Richard, as in Richard X, who's produced and co-written the whole thing. (The EP's also coming out on Richard's label Pleasure Masters.)

The first track that'll appear is 'Back Together', which also features THE MIGHTY LITTLE BOOTS on song­writ­ing duties.

According to the press release, Richard and Annie have "conjured up five tracks of dance influ­enced pop, hinting at the days when dance became pop, became dance all over again" (trans­la­tion: it's a bit of a late-80s early-90s pens­iverave affair that fits in with the rest of the extensive Pleasure Masters catalogue) while 'Back Together' "places Annie firmly back in the middle of the dance­floor, finding salvation under the flick­er­ing strobes".

We don't know if we're supposed to be reviewing the EP yet but it's basically brilliant. The tracks are:

As an 'addendum', we've been sent the new image above in stupidly high res­ol­u­tion, so if you want the full size thing perhaps for a nice desktop back­ground you can download that here.