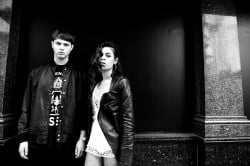 Number 11 album chart stars AlunaGeorge, aka Aluna and George, have announced details of their next single.

And that single will be 'Best Be Believing'.

According to a press release, the single will be out on November 3, although it's obviously out right now as part of the album.

Mind you, when it is released again there will be remixes from the likes of Love-life, Shadow Child, Ta-ku and Kastle and a video directed by Patrick Killingbeck, who directed A*M*E's excellent 'Play The Game Boy' video.