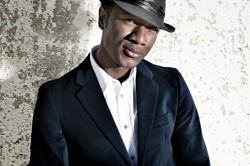 Dollar-requiring crooner Aloe Blacc has signed up to live on £1 a day for five days, as part of a charity campaign for Live Below The Line.

The singer joins stars such as The Only Way Is Essex's Lauren Goodyear in the fun­draiser, which aims to "bring to life the direct exper­i­ences of the 1.4 billion people currently living in extreme poverty".

Not that Mr Blacc is any stranger to helping others. He recently followed in the footsteps of Alexandra Burke in becoming a 'blogger' for The Huffington Post, though he has not as yet shared his thoughts on #twe­am­burke with the readers of the website.

The Huffington Post describe Mr Blacc's Number Two hit 'I Need A Dollar' as "an anthem of our times". Poor 'Lucky Day' :(