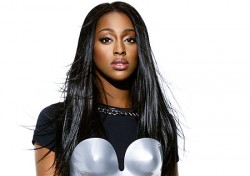 Alexandra Burke has announced the release of her new single.

Breaking her sab­bat­ical, she tweeted this morning: "I can offi­cially confirm… My new single is called 'Elephant' Feat Erick Morillo … "

The first release from her 'sophomore' album will hit the virtual shelves on February 26.

She began working on the follow up to 'Overcome' 13 months ago and this single was ori­gin­ally due for a September release.

At the time, she posted on her official blog: "To all my sup­port­ers out there.. Firstly again. Thank you for you patience. I am so so sorry for telling you guys that a single would be serviced to radio this week, that was the plan but weve decided to take a tiny bit more time…and RCA want to make sure everything is perfect".

It had bloody better be, Alexandra.