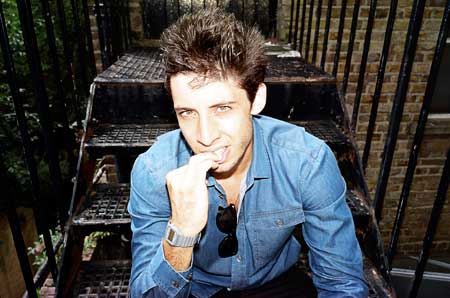 A couple of years ago a rapping chap by the name of Example released a half ropey/half quite good album on Mike Skinner's Beats label. It all sort of went a bit tits up but in the time since it going tits up Example has:

3. Been recording near London with Metrophonic, under the stew­ard­ship of legendary 'tunesmith' Brian Rawling. A man called Brian who was partly respons­ible for 'Believe' for Cher, you say? A recording studio in the coun­tryside just outside London, you say? A team of writers and producers working on music for a suc­ces­sion of artists, you say? 'It will never work.'

Anyway what's happened as a result of all this isn't exactly an about turn on what Example was up to before — the last album had Kylie and The Carpenters in it, for a start — but it's a more focused pop sound with sens­ib­il­it­ies that are a) under­ground b) over­ground c) Wombling-free. As well as working with the Rawling brigade Example's also been working with people like Pascal Gabriel, Chase & Status and Calvin Harris. Multi-producer albums often have a slightly messy and uptight feel about them; this one flows and makes sense and, having had the chance to live with some of these tracks for a few months now, we can report that some of them are VERY GOOD INDEED.

EG 3: This one sounds like it has an Ian Dury sample in it (BUT DOES NOT) and is called 'Next 7 Hours'. It's a bit like a Five single, don't you think?

There is also a song called 'Millionaires' which has got a choir on it, sounds a bit like a Mike Skinner grannybal­lad and includes the soon-to-be-legendary line:

So 'Watch The Sun Come Up' is out in September, then the album will come out and everyone will go 'oh that's quite good, well done Example', then maybe they'll release a ballad for Christmas Number One or something. We are sure they know what they are doing.

Incidentally when we asked Example for some more inform­a­tion about 'Won't Go Quietly', he emailed us this.

"'Won't Go Quietly' is my take on the 80s femme fatale vibe — one of my favourite films I studied in my uni days was The Last Seduction. I wanted to take a little bit of 'Dirty Diana' and blend it with a flavour of Depeche Mode, Duran Duran and Chromeo all on top of a Justice‑y beat. Well that was my brief anyway. It's about mad mad dark women who are just such incred­ible sexual animals that you find it hard to leave them — even though you know they're not good for you. Hence the line: 'i should be thinking it over, instead I'm calling her over'. And when you do even­tu­ally ask them to leave they won't go without an argument. They won't go quietly."

Hence, as they say, the name.

Event coverage: people in a room watched some people on a raised platform singing some songs

This is how you do a Little Boots remix