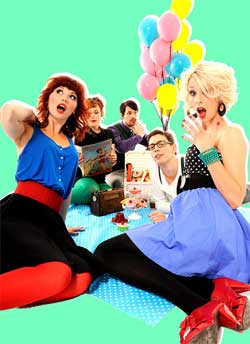 You may (and certainly SHOULD) remember Le Kid, the brilliant Swedish pop act we fell in love with and wrote about a few times almost a year ago.

Well, the good news is that they have not fallen down the back of the pop filing cabinet forever and are, in fact, still very much a 'going concern'. They recently went on tour with Alphabeat in Denmark and they have even signed a UK deal.

The bad news is that it's not all quite ready to go yet, so the band have asked that the precise nature of this afore­men­tioned recording contract is not revealed.

But the GOOD news is that to keep things moving along the band have put a new track on their website, le-kid.com . (It's an unusually enter­tain­ing band website and well worth a quick look.)

As a refresher, then…

1. Here is 'Escape', which is the new song, and is today's Song Of The Day. The band tell Popjustice it's not likely to be a single (or if it is
"perhaps single number four, five or twelve") but it's basically
amazing so the fact that it simply exists, whether as a single or
otherwise, is enough to be getting on with.

2. This is 'Telephone' — it's a song about telephones.

3. And finally here is 'Mercy Mercy', which this time last year sounded a bit too much like Girls Aloud's 'Can't Speak French' but now, in the cold light of 2010, just sounds amazing.

Also, while the band were on tour with Alphabeat they recorded some video things, as one does these days. Here's one.

Marina & The Diamonds' 'I Am Not A Robot': an old video, a new video

Some words re Robyn and Royksopp's 'None Of Dem'