We think bands and/or artists who could con­ceiv­ably 'get away with it' include: 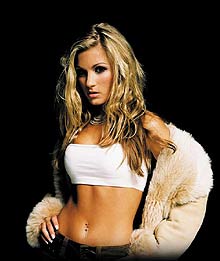 Unfortunately, or for­tu­nately, depending on how you look at it, the song has been done by None Of The Above and is instead the work of an Irish lady called Shelley.

As you can see in the picture, Shelley would probably not win very many ugly com­pet­i­tions, although if she thinks she's going out like THAT while she's still living under our roof she's got another thing coming, etc etc etc.

Shelley has also done a song with the James Bond theme in it. It is called — wait for it — 'Be My Double O'. That is also 'quite listen­able', and you can listen to it at the inev­it­able MySpace page.

We find this section…

"She began recording with Religion Music after turning down an offer from Louis Walsh to be in UK pop band Hear Say."

…a bit confusing, but there you go.

He is little. His name is Chris.