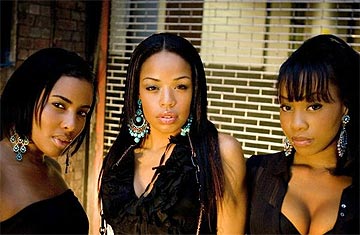 This is the a new group of ladies called Honeyshot. They're the group we told you about last year — put together by GUM Entertainment, a division of ad-makers Saatchi & Saatchi.

Here's what Brand Republic had to say in April:

"Saatchi & Saatchi is touting a man­u­fac­tured girl band, created by the agency, as its latest ad weapon in the battle to reach young consumers.

"Marketers will be able to hire the as-yet-unnamed group to promote their brands in their songs, their clothing and what they eat and drink.

"Already a drinks company, a consumer goods marketer, an enter­tain­ment business and car man­u­fac­tur­ers are said to be lining up for the chance to align their products with what appears to be the most dis­pos­able incarn­a­tion of pop in a post reality-TV world."

On the evidence so far, we were wrong. The single, 'Do It', is alright and the girls them­selves seem perfectly likeable — but the band itself is unre­mark­able, the video on their website is shit even for a test shoot, their website looks like a ringtone site, their styling is com­pletely uneventful.

According to the band's press release, the team behind Honeyshot…

"…realised for the music industry to regain lost ground they must not only embrace new tech­no­lo­gies, but must create an exciting new way of promoting music and talent to an increas­ingly hungry, tech­no­logy savvy public. [Continues in this vein for some time] Using brand new mobile and web tech­no­lo­gies, Honeyshot are at the forefront of a digital music revolution!"

Can you guess what that means? That's right, viewers — they've got a WEBSITE and a MYSPACE PAGE. But that's not all, of course!!! Because they are also looking for their fourth member — and you can enter by UPLOADING A VIDEO OF YOURSELF! (NB: This is obviously all part of the longterm plan and nothing at all to do with the fact that they lost a member in the time between the video being shot and the single being launched.) And they're doing a SOAP OPERA which you can WATCH ON YOUR PHONE!!OMG1111!1ELEVN!!

And that, readers, is that. That is GUM Entertainment's 'big idea' on how to launch a pop group. Too consumed with ideas of the 'tech­no­logy savvy public' to realise that the music-buying public are, espe­cially in the demo­graphic Honeyshot are being aimed at, more marketing savvy than ever before.

We think it's fair to say that anyone thinking of buying into this — media outlets, brands thinking of working with the group, pop fans — needs their head examined.

UPDATE: They've been on the phone. More tomorrow…