You know about Bonde Do Role, we've told you about them on several occasions.

Here is a picture of a pile of stuff with their logo on. It is currently sitting in the Popjustice office but we have decided to give it away to you. 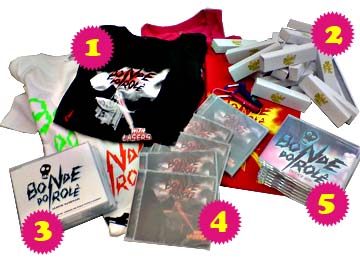 1. These are five pro­mo­tional t‑shirts. What is special about these t‑shirts is that they are all wearable due to a) having nice designs and b) not all being enormous.

2. Here are 'a fucking shitload' of laser-pens. Everyone at PJ HQ has helped them­selves to one and we still have an enormous pile of them. So far we have dis­covered that they are handy for annoying builders, scaring dogs, and upsetting sub editors.

3. Wowza — it's ten Bonde Do Role album samplers. These are alright but not as good as…

5. Ten Bonde Do Role 'Office Boy' singles. Like the album samplers but even more brief.

We're going to give away five sets of each. This will leave us with a few leftover bits and pieces which will no doubt end up on a shelf somewhere, but such is life.

Win some tickets to see Mutyarmada