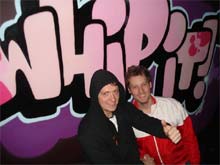 You might have noticed that a band called The Whip have made their big debut in The Popjustice Almighty this week. Well done The Whip.

We have not mentioned The Whip here before, so let's sort out the basics.

There are four songs on their MySpace page. Two of which are mixes of the incred­ible new single 'Muzzle No 1'. It could easily have been the new LCD Soundsystem record, but it isn't obviously.

'Trash' is also brilliant, but as is the case with the single, just as everyone has decided that New Rave is a load of old bollocks made up by a pop obsessed indie band, people like The Whip are starting to record songs that actually sound like bloody New Rave records.

Can someone at Music Genre Headquarters please make a decision one way or the other on this please?

Anyway, 'Frustration' is also amazing, sounding a bit like Joy Division but from space or the future or somewhere else where robots make all the important choices about society and pop music.

This is a place we wouldn't mind visiting.