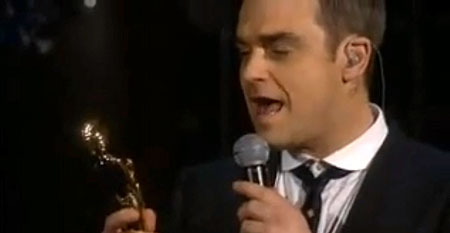 It's not a new question but picking up Outstanding Contribution at the Brits does rather force the issue.

So here's the problem: we've spent the last five months hearing that Robbie Williams is back back back as a going concern in the pop world with great new material and a renewed sense of purpose after the perceived wobble of 'Rudebox'. Next thing you know it's the sort of backward-looking Brits per­form­ance usually reserved for acts without much left to give, ahead of another greatest hits for Christmas 2010. It doesn't quite work and Robbie deserves better because, as around 40% of 'Reality Killed The Video Star' proves, when Robbie's on top he's the best we've got.

What next? Well, the first thing that needs to happen is for the Take That reunion to happen as soon as possible. Take That don't need to do it and Robbie doesn't actually need to do it, either, but he needs to get it out of his system and both parties would benefit from being able to continue with their respect­ive careers away from boring "ROBBIE AND TAKE THAT TO REUNITE???LOL" news stories. Robbie and Take That should count them­selves lucky: the media won't be happy until certain celebrit­ies are sectioned or dead, and all that's required here is some sort of reunion. Any sat­is­fy­ing reunion would need to take the form of something temporary but concrete enough to meet demand. A one-off single to coincide with a somehow 'special' (of the Albert Hall variery) live show would do the trick, pre­sum­ably with some sort of charity element factored in by way of an excuse.

Whatever it is, get it out of the way and do it as soon as possible: Robbie's loose plans to reunite with Take That have been hanging over the 'Reality Killed The Video Star' campaign which has, as a result, seemed like little more than Robbie killing time before 'the news everyone has been waiting for'. Regardless of Robbie's actual plans, nobody is taking Robbie Williams seriously as a solo artist until a Take That reunion has happened and been dealt with.

Come back to us when that's happened and we'll let you know the next step in the plan.