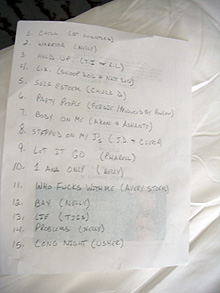 We went and had a listen to Nelly's new album 'Brass Knuckles' the other day.

Apparently the album is called 'Brass Knuckles' because the way it hits you is like you are being hit by a 'brass knuckle'. (ie One of those things that looks like a cock ring for a man with four penises.)

As you can see from the tracklist (right) it goes on forever but one of the songs sounds a bit like 'Mambo #5' (amazing) and it's generally fairly jolly.

Anyway there's one song on it called 'Lie' which is really amazing.

By the way, did we tell you about the man with five penises? His pants fit him like a glove.

Are you ready to be shocked by the new tATu video?