Only guest editing (or "co-curating") the new issue of Wired magazine! 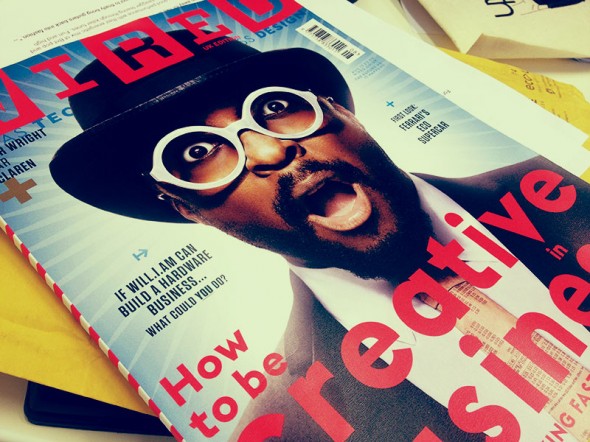 That's a good cover isn't it? (It's in shops in a day or so; you can subscribe to Wired here.) Sometimes we wonder if people mainly do big cover stories with Wired in order to have something nice to frame and put on their office walls. That would be quite a good 'altern­at­ive revenue stream' for Wired, wouldn't it — charging wanker CEOs £5K a pop for a mocked-up Wired cover.

The main will.i.am feature (which is TEN PAGES LONG) is really inter­est­ing and revealing, sometimes in ways will.i.am may not have intended. It seems to have been organised around his i.am+ tech­no­logy company, spe­cific­ally its first product 'foto.sosho'. 'foto.sosho' — and it's hard not to type or even speak that name without adding inverted commas — is a ridicu­lous and awful iPhone accessory. Here it is being demon­strated. Bear in mind that this accessory is priced between £200 and £300.

Do you know what they really mean by "it's meant to be worn as a fashion accessory"? They mean "oh dear it turns out this is too big to go in your pocket". As gadget experts Gizmodo note in their review, "if you’re wearing this, you’re an idiot". Yet wann.a.be wills — those who look to will for his entre­pren­eur­ial business mind — won't care that this item is obviously pointless tat of the worst kind. The fact that will.i.am is bringing it to market is the part that's worthy of respect. In fact, that fact that he's brought it to market when it's obviously terrible is even more worthy of respect.

You'll find similar admir­a­tion for success-regard­less-of-quality in pop, as well — very often you'll speak to musicians who respect other artists for 'killing it in America' with music they'd never dream of listening to — but it's strange that will isn't bringing his knowledge of music into play with the 'foto.sosho'. He wouldn't dream of releasing an album that was only playable on one par­tic­u­lar type of audio device — well, not unless that device's man­u­fac­tur­ers chucked a load of cash his way in exchange for a hashtag-strewn co-branding hookup — yet he's expecting people to buy a 'fashion accessory', priced at £300, which will become instantly useless when Apple unveil the size and shape of their next iPhone. will says that having pre­vi­ously man­u­fac­tured an iPhone 4‑compatible model, he's launching an iPhone 5 version this month. Who's going to chuck £300 at an accessory in July when the next iPhone is reportedly due to be announced in August? The sort of person who'd wear one of these round their neck as a 'fashion accessory', pre­sum­ably. Perhaps will is onto a winner after all.

But how did this idea even come about?

"I noticed last February at a pho­toshoot that a picture taken with an iPhone was seen by more people than the pho­to­graphy that cost $300,000," will tells Wired in the interview. "I thought, 'let me create a camera that uses an iPhone as a chip."

This man is a lunatic. He's missed the very obvious point that the image someone captured on their iPhone then, pre­sum­ably, shared over social media in a fairly fric­tion­less fashion, was breezily pointed-at-and-shot because the iPhone was so con­veni­ent to use. Or to put it another way, because they didn't have to attach their iPhone to a 'fashion accessory' that had been clumsily swinging from their neck all day, find out whether or not the 'fashion accessory' was even charged, pair the two devices, fire up the pro­pri­et­ary 'fashion accessory' app on their iPhone, take the picture then share it through the device's own app. Quite obviously, to everyone except will.i.am, by the time you'd finished fucking around with all that, the image you'd hoped to capture would be long gone. will.i.am's attempt to 'improve' the iPhone — whose camera, lest we forget, is pretty great — is like someone attempt­ing to 'improve' an iPod by strapping it to a mains-powered record player.

In the Wired article, dis­cus­sion of will's shit iPhone invention falls under 'BE A MAKER', the first of thirteen sections. Elsewhere we encounter 'DON'T ASSUME EVERYONE CAN BE CREATIVE' (in which will compares Intel to Jimi Hendrix), 'STUDY NIGHTCLUB CULTURE TO FORECAST CHANGE' ("I call myself a pop­thro­po­lo­gist"), and 'HOLD A SEARCH PARTY'.

Don't know what a 'search party' is? Allow will to explain. "When I'm touring, after a show, I just Google shit." (At this point it's probably worth stating that will pre­sum­ably means that he Googles 'stuff', not that he's into scat.) (That was Popjustice's explan­a­tion, not Wired's.) "I have 'search parties' — we geek out, search random things, figure out what's happening, what's not happening, see where a search takes us."

Hang on, we nearly let that one pass without comment.

"I CALL MYSELF A POPTHROPOLOGIST."

This really is just a taste of the interview, in which will does make some good points — other sections in the feature are called things like 'FIND AN EFFECTIVE MENTOR' and 'ASK QUESTIONS AND LISTEN'. As a whole the article is a really fas­cin­at­ing insight into the mind of someone people in pop and other indus­tries increas­ingly look to for advice on where things are heading. In fact, in a different part of the magazine, various CEOs and company directors are directly asked the simple question: "What is the future of music?"

will.i.am is one of the people asked. He's billed as a musician, entre­pren­eur and phil­an­throp­ist. Which is fair enough we suppose. Anyway here's what he has to say, and you're going to need to hold onto your bowler hats here because this'll really blow the top of your head right off.

"Music-streaming services will get smarter," will says, "by incor­por­at­ing curation input from artists who impact on popular culture. People who know what they like — or who don't know what they are looking for — will be able to exper­i­ence new music recom­men­ded by admired tastemakers."

Really will? Really? Is this really the best you can do? Or did you mis­un­der­stand the question? Did you think 'what is the future of music?' somehow meant 'what was everyone talking about at least eight years ago'? You're talking about celebrity playlists! Even pre-relaunch MySpace was doing this! BLOODY HELL WILL!!! The real future for streaming services lies in a com­bin­a­tion of con­sol­id­ated platform-agnostic services and a revolu­tion in the way busi­nesses and consumers approach metadata, with curation on the side. Although how people will stream songs on the new pop.jus.tice 'gramo.phono' — IT'S A FULL-SIZE RECORD PLAYER FOR YOUR iPHONE! — remains to be seen.

(NB: In the interest of balance we're going to do a Top 10 Things will.i.am Has Done thing tomorrow because his career isn't, of course, just rubbish iPhone accessories.) 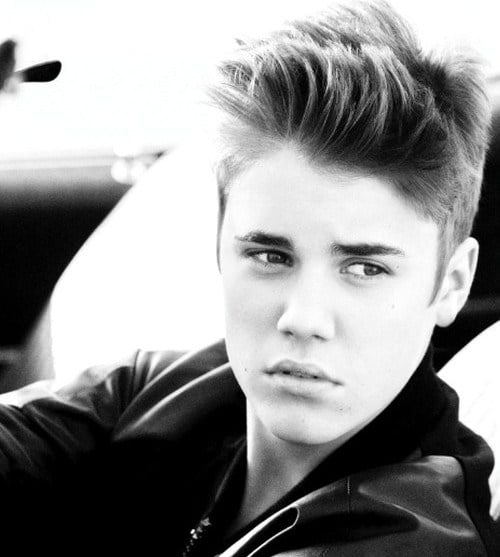