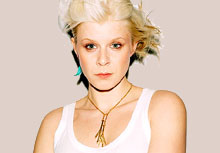 We inter­viewed Robyn a few weeks ago. Chances are you haven't noticed it because of the great big advert that's been covering the button. But it's over there on the right >>

She was very nice indeed and was in the middle of a spin-cycle when we called. If you've not read the interview yet, here are some key facts you missed:

Â» It was her pants she was washing.

Â» She is very likely to leave the country when people do not do as she asks.

Â» Her last two albums were not up to scratch. (Her words.)

Â» Her version of 'Keep This Fire Burning' was superior to the Sir Beverley Knight attempt.

Â» She is releasing an EP in this country very soon. It has been eight years since the last Robyn record.

The rest of the interview is right here.

The greatest Westlife video of all time