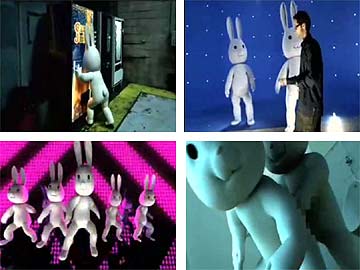 The video for the new Groove Armada single is really, really amazing. It features evil rabbits fucking, attacking vending machines and running amok at a video shoot. It's worth a look even if you don't like the song, although you might end up liking the song by the end of the video which is sort of the whole point of pop videos, isn't it not?

The video is here.

We do not know what is happening with the whole 'Out Of Control (Song For Mutya)' business. We are presuming that once Groove Armada have got this one out of the way and Mutya's got 'Real Girl' out of the way they can both release 'Out Of Control' as their joint second single. It would be good if they had a huge argument and decided to release the single sep­ar­ately on the same day with different videos and things.

As an aside, there's something encour­aging in the fact that while some labels are running around trying to get anything and everything in any danger of actually promoting their music stripped from the internet, Groove Armada's label Columbia have their own YouTube page featuring some of their biggest upcoming releases.