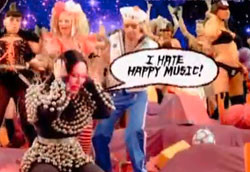 There is a point in the 'space-age' video for the new Vengaboys single (!) 'Rocket To Uranus' (!!) when some sort of inter­galactic enemy, portrayed by Pete Burns, covers his ears and grimaces. There's a speech bubble coming out of Pete Burns' mouth: 'I HATE HAPPY MUSIC!'.

The problem here is that the enemy of happy music is not this cosmic funk­illing spacegoth portrayed by Pete Burns, but  'Rocket To Uranus'  itself. It's like a pastiche of happy music; music whose happiness is twice-removed. It's happy music to order, like a 'say-cheese' smile in a Fred and Rose West family photo.

Vengaboys were uncon­vin­cing enough in the late 90s, but twelve years later it's all pretty grim.

[youtube]C341IYl2r4k[/youtube] (Yes that is Perez Hilton in the video.)

It's quite inter­est­ing to see this alongside that teaser footage of the new Katy Perry video which, like the 'Rocket To Uranus' video, feels like it's going through the motions and just isn't con­vin­cing in its sup­posedly carefree spirit. 'I AM HAVING FUN LOOK AT ME THIS IS FUN.'