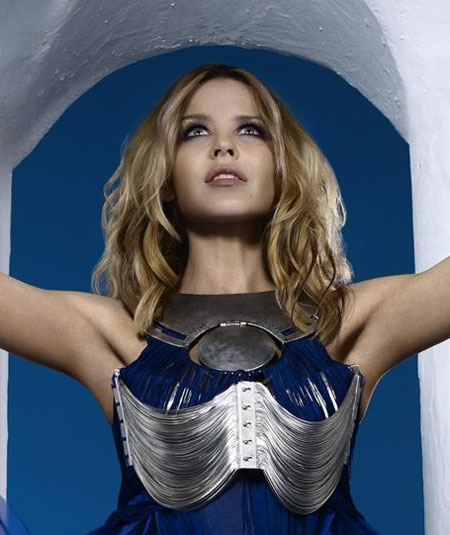 So Kylie's got an album coming out. 'Aphrodite'. You may have seen it mentioned here and there.

It's already leaked so you'll already know that there are some amazing bits and some not-so-amazing bits but that the general standard is rather high. Two new tunes not on the proper album are bonus tracks 'Mighty Rivers' and 'Heartstrings'.

One is not up to much, the other is UP TO QUITE A LOT.

This is the not up to much one, it's called 'Mighty Rivers' and you get it in the 'iTunes Deluxe Experience' package if you buy 'Aphrodite' on iTunes. It's not exactly bad and bits of it are almost amazing ("I was so close to the edge I was falling down" is a great opening line) but 'as a whole' it's deffo bonus track material.

[youtube]IlrKTOrXfYs[/youtube] Right, so that's all quite pleasant and nice but it's unlikely to change the world.

HOWEVER: this is 'Heartstrings'. Xenomania News just posted it on Twitter. We love this song a lot. It's optim­istic and happy but a little bit sad and pensive at the same time

[youtube]pl-0V3LPue0[/youtube] It's hard to think of 'Heartstrings' as a single but this would have been a brilliant addition to the album. As it currently stands 'Aphrodite' does feel like it needs a little bit like this song's warmth, and 'Heartstrings' itself certainly deserves better than to be binned off as the bonus track on the Japanese edition of 'Aphrodite', which is the only place you'll be able to buy it.

THEN AGAIN WHAT DO WE KNOW.

The Pipettes — 'Over Heels'